In an article about Steven Messham the Daily Mail have resorted to victim blaming of the highest order.In their article they have defiled the character of Messham, undermining every statement he has made about child abuse as fantasy. He has been handled with a complete lack of compassion and understanding.

In their incendiary article the testimony of all survivors from Bryn Estyn has been called into question. They imply that the witness testimonies of the survivors is unreliable due to the many criminal convictions between them. This completely loses sight of all links between children in care and criminality. It does not mean that their numerous statements which confirm each other should be disbelieved.

We all know that the Daily Mail likes to antagonise and indeed have seen the paper’s founder, Lord Northcliffe’s statement about a daily piece of hate. But victim blaming, and denial of abuse to this extent is unforgiveable. Is it any wonder that survivors find it hard to come forward when they risk opening themselves up to this? Many a cruel or ill-informed person, often on Twitter, has implied that the survivors of Saville’s abuse have only come forward because they are expecting a pay out. Surely it is evident that people will often only come forward when there is strength in numbers?

The Mail has published several articles about paedophiles and abuse yet seems completely oblivious to the part they play in creating a culture of abuse. One such incident was an article they published about a woman who had been raped yet it focused on how much she had had to drink. They write articles about the sexualisation of children yet other articles are guilty of doing just that. It is such hypocrisy which helps to create the culture which leads to the crimes they report.

The Messham article, amongst others, supports the culture which tells survivors it is not safe to come forward. It supports a culture of disbelief which has led many a survivor to struggle in silence, for what, as we have seen, can be decades of trauma. It is a culture which tells survivors that they will not be believed, yet if they are they will nonetheless be blamed for the abuse they have suffered. This culture allows abusers, molesters and rapists to feel safe in the knowledge that they will not have to pay for their actions. How many fewer rapes and abuses would there be if this culture ceased to exist? It is this culture which makes me want to fight back, and say to all survivors of rape and abuse, “I believe you”. 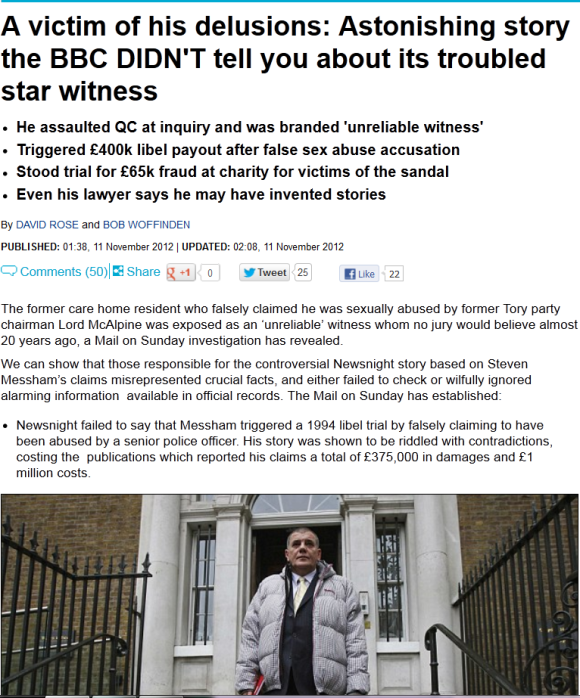 *I have included screenshots of the article in good faith, and have included appropriate links and citations. If I have in anyway contravened copyright I will happily remove the images from my blog. The original article appears here www.dailymail.co.uk/news/article-2231212/A-victim-delusions-Astonishing-story-BBC-DIDNT-tell-troubled-star-witness.html

3 thoughts on “The DM and Victim Blaming”