In 1963 Betty Friedan wrote the movement provoking book The Feminine Mystique. Forty-nine years on women have seen many changes for the better. Women are leaving the home and have access to careers. They have more options than motherhood and indeed are choosing to start families later. Many women receive university educations, and have an increasing role in politics. 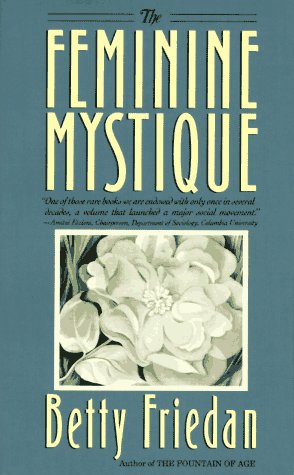 Yet, we can ask if life for women has changed as much as it should have?

All those years ago Friedan pondered, “Each suburban wife struggles with it alone. As she made the beds, shopped for groceries, matched slipcover material, ate peanut butter sandwiches with her children, chauffeured Cub Scouts and Brownies, lay beside her husband at night- she was afraid to ask even of herself the silent question– ‘Is this all?”

Numerous sources suggest the situation has little changed for many women. Almost 50 years on and women are spending more time with their children than they were during the second-wave feminist movement. The Family and Parenting Institute asserts that in 2002 mothers were actually spending three times more time with their children than in 1972.  The CoupleConnection.net suggests that women spend more than two and a half hours per day doing household chores compared to an hour by men. The British Attitudes Survey suggests this is not simply down to a woman’s working hours, showing that women in part-time work are just as likely to spend as much time on housework whether they work part-time or are not in paid employment.

The way in which women are seen as “chief, cook and bottle washer” is consistently evident within advertising. A recent advert for the cleaning product Flash showed the last few decades of adverts condensed into one.  In each advert it was a woman who was shown to be responsible for all housework duties. We’re reminded of Friedan’s statement, “No woman gets an orgasm from shining the kitchen floor.”

Men apparently are only allowed to appear in advertisem

ents for cleaning products for the purposes of dramatic irony, the point being that we all know men cannot really perform such tasks!

The slogan for t

he frozen food shop “That’s why mum’s go to Iceland” is one amongst many examples of everyday sexism. Perhaps the most surprising thing about ASDA’s recent Christmas advertising campaign is that their sexist advert, showing all household duties as women’s work, actually resulted in an uproar.

Friedan remarked, “In almost every professional field, in business and in the arts and sciences, women are still treated as second-class citizens. It would be a great service to tell girls who plan to work in society to expect this subtle, uncomfortable discrimination–tell them not to be quiet, and hope it will go away, but fight it. A girl should not expect special privileges because of her sex, but neither should she “adjust” to prejudice and discrimination” We can celebrate that women now achieve academically. Indeed, in 2010 women were more likely to find a graduate position than men. Why then, is it, that we still see a gender pay gap? The Fawcett Society predicts that there is still a 14.9% difference between the amount women and men are paid for the same job and the situation is at risk of worsening as women are pushed from the public to the private sector, where the gender pay gap is over 20%.

Friedan was discomfited by the world she saw around her when she said, “When she stopped conforming to the conventional picture of femininity she finally began to enjoy being a woman.”  Yet now women are fetishising the world of femininity which Betty Friedan sought to expose as a prison for women. A quick search on Google will reveal the extent to which women seek to emulate the fashions of the overtly feminine 1950s housewife.

Recently shops like Next have dedicated whole lines to selling retro kitchenware and the moniker “domestic goddess” is well known in our vernacular. It is as if women have decided to idealise their own oppressions. Feminists have siezed burleque and pole dancing as signs of empowerment, and whilst one should be careful not to oppress women’s rights to make their own choices, one could also be forgiven for agreeing that there is little distinction between what one woman sees as empowerment and the other oppression. Almost 50 years on from The Feminine Mystique should there not be less focus upon a woman’s sexual capital?

The term post-feminism suggests that the movement is over. The reality is far different. The feminist movement still rages on in various guises. One in four women still experiences sexual violence, one in four women will experience domestic violence. The glass ceiling is still firmly in place and women make up only one-eighth of our current cabinet. With such little change women must continue to fight until true equality has eventually been achieved.